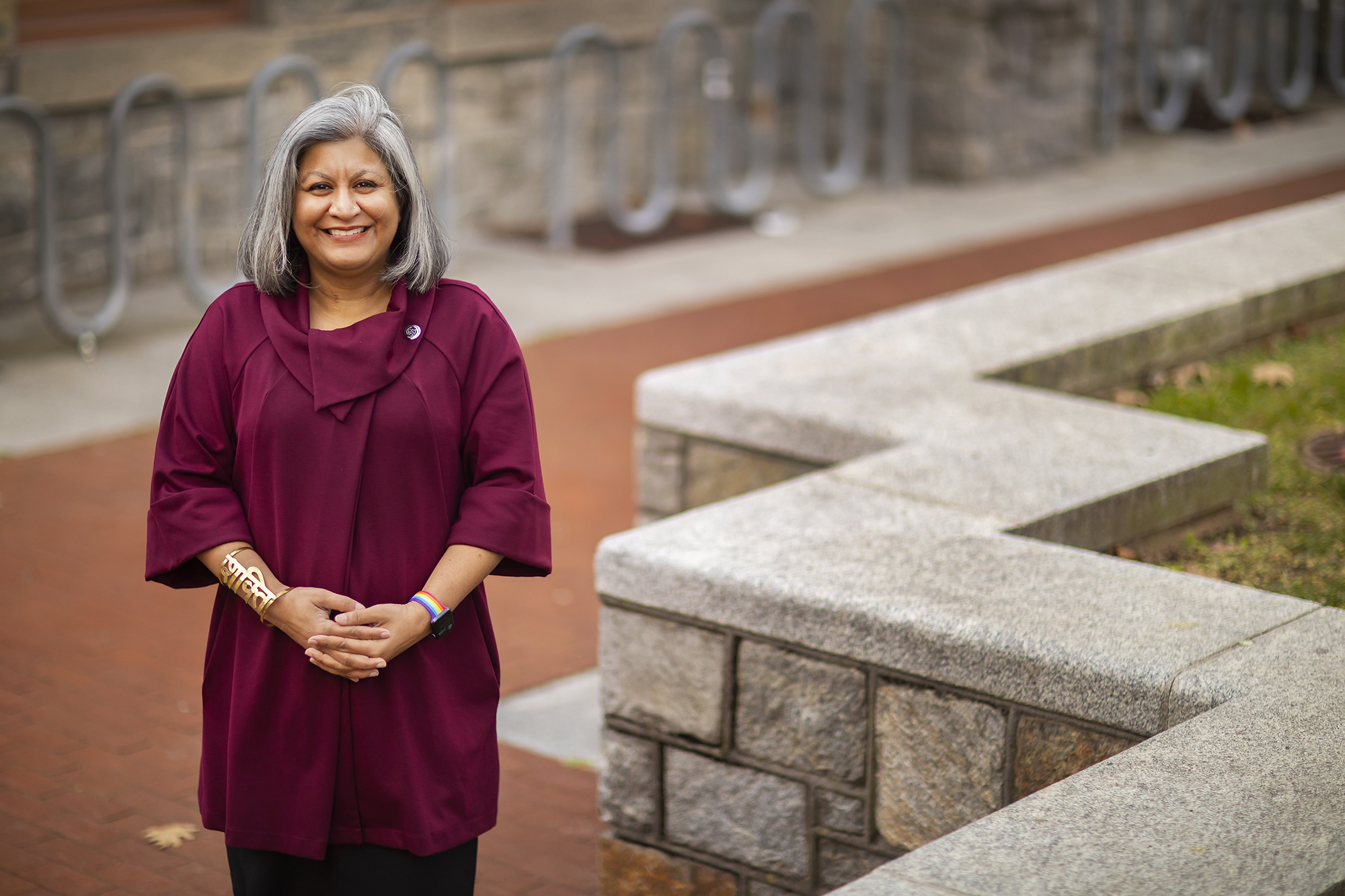 Vice Provost for University Life Mamta Accapadi is often heard using the phrase ‘collective wisdom.’ It is a mantra that describes her approach to leveraging leaders around her and prioritizing partnerships in everyday operations.

Quite simply, collective wisdom is a guiding principle of using students’ different lived experiences to help them make informed decisions. Supporting a variety of representation helps shape the direction of the narrative.

Collective wisdom creates a compounded interest of love to the table in service of a greater good. At the heart of equity, inclusion, and justice, the root energy of student success should predominantly be love. Accapadi defines this love as an “unconditional, unwavering commitment” transferred over multiple generations manifested in one person.

When a student has a voice at the table, she explains, it represents the convergence of their family and ancestors. Every human consists of several generations of hopes and dreams. They become the realized dream of some ancestor that they’ve never met.

“We are in community with a bunch of ancestors who are looking down on their descendants,” Accapadi said. “Their dreams come true on our campus, and our job is to hold that sacred and steward that in our community, at least in higher education.”

Subscribing to collective wisdom fosters a climate that reflects on how processes and practices are uniform, flexible, and sufficient. If successful, the approach focuses on the care and dignity of a student.

The leadership series will highlight the collective wisdom and stewardship of Accapadi and her leadership team. Mamta is inspired to be part of a senior student affairs leadership team that is led entirely by women of color.

“To bring collective wisdoms to the table means we're amplifying humanity: the multiple versions of humanity at the table. The more diverse our team, the more manifestations of humanity, humane perspectives, and ways of knowing and being, are part of our team’s consciousness. People’s humanity at work is one of the most cherished gifts that they bring, especially in our organization.” 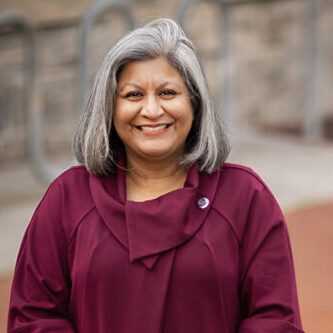 When asked about collective wisdom, Mamta reflects on her own childhood and family.

Born in New York and raised in Texas as the oldest child to Indian immigrants, Mamta Accapadi says it was written into her life that she would become a navigator. English was her parents’ fourth language, and language barriers often meant that she would step in as a quasi-translator. She was taught at age nine to forge her parents’ signature on inaccessible school forms. She would get called to sit alongside her mother as “customer service” for her younger siblings’ parent-sibling conferences.

She attended the University of Texas at Austin as a microbiology major. Disinterested in her parents’ expectations of becoming a medical doctor, Accapadi told her academic advisor of her struggles with the transition to undergraduate education: she had difficulties with course choice, graduation progression, and career planning. She told the advisor that she was struggling with college. In one breath, her advisor told Accapadi: “Well, your people are smart – you’ll figure it out. You’ll be fine. Don’t worry about it. You’re in America and you are an adult — you can do whatever you want.”

Accapadi had been affixed both two major Asian American stereotypes — perpetual foreigner myth and model minority myth — within two minutes of her first-ever academic advising meeting. Decades later, she reflects on that conversation and how, even if she had been referred to a counseling center, there was little support for college students’ identity-based needs at that time.

In the wake of that meeting, Accapadi was falling through the cracks, directionless. She stopped attending class entirely during her sophomore year. Her academic struggles had not triggered any of the existing monitoring services because her grade point average was padded by high school AP course credits.

“All of the systems that were there to support me were operating in their silos and not talking to each other,” she said. “I think about that, as an educator, literally every day when I walk into work.”

Accapadi considers this metaphor when creating policy and managing operations for University of Pennsylvania students.

“It is my belief that we should be so tightly woven together that we’re like a trampoline,” she added. “So, that when a student falls, they bounce back up. Otherwise, why are we doing what we do as educators?”

Reluctant to admit her failing grades to her parents, Accapadi applied to become an orientation advisor at Texas, solely because it offered money and living space.

Advising orientations became the turning point for Accapadi. UT required a minimum semester GPA for its advisors, and it encouraged her to attend class. An education psychology class set the framework for student affairs, human development, and mental health that began her journey into higher education. Accapadi said she internalized that if it was not hard sciences, it would be easy and perfunctory.

During that orientation program as an undergraduate, she noticed a lapse in conversations about diversity. Support programs were offered for historically underrepresented communities, but there was no training designed for incoming student populations to build allyship and consider our shared responsibility to create diverse communities.

The journey led her to three degrees at University of Texas at Austin, including a Ph.D. in higher education administration with research interests in Asian American identity and social justice education. She served as the Vice President for Student Affairs at Rollins College and Dean of Student Life at Oregon State.

Mamta’s leadership approach has made her one of the most prominent national figures in university student affairs. She devoted her career to goals of inclusion, community, and social justice. As a child of Indian immigrants, Accapadi serves as an advocate for first-generation and low-income students. When she was named Vice President of Student Affairs at Rollins College, she not only became the first VP of color at the institution but one of the first VPSAs of South Asian descent in the country.

She found it difficult to leverage her voice in the profession early in her higher education career. She was trying on assorted styles of leadership that she’d been studying, none of which seemed to match.

For starters, the Vice Provost for University Life did not see herself as a leader, not in a traditional sense. Leaders command and control rooms, pointing fingers and delegating responsibilities. In contrast, Accapadi saw herself as a woman who was boring, demure, reticent — at best, she considered herself a reluctant leader.

It was not until she became Dean of Students at Oregon State University that Accapadi realized she had been internalizing her South Asian identity and womanhood as a weakness. As she was questioning her career trajectory, she realized the effectiveness of having direct dialogue in an open setting.

“Anytime there was a conflict at work, I would just say, ‘hey, can we all meet in the conference room? There’s coffee in there. Can we sit around the circle and just talk it through?’,” Accapadi said. “How many meetings and emails you can avoid by if you just do that and handle it up front.”

Back home, she noticed similarities at tea parties in the Indian American community. They solved conflicts and addressed business while making chai and pouring tea into cups around a circle.

“I reflected on how, for most of my life up to that point, I had been stripping myself of generational wisdom,” Accapadi said. “My leadership strategy actually looks a lot like my grandmothers, mothers, or the many women I’ve seen in my own upbringing. But I had ignored it, and I’ve kind of just discarded that as not valued perspective.”

The remainder of the Leadership Series will feature Tamara G. King, Senior Associate Vice Provost for University of Life, and her pioneering experience as a legal scholar and in higher education; Laurie A. Hall, Assistant Vice Provost for Strategic Planning and Operations, and her reimagination of how Penn uses space through a social justice lens; Sharon Smith, Associate Vice Provost for University, and her reconstruction of departments around the concept of community care to support students in crisis; and the division’s success at NASPA as an embodiment of collective wisdom.

“I work with precious gemstones and pearls, and I am only the clasp on the necklace,” Accapadi said. “Without that clasp, all you have are a bunch of scattered precious stones. I think what I’m able to bring to the table is how does all that come together to make a priceless necklace that you wouldn’t see otherwise. It plays the part. And I feel that’s what I have to offer.”