Most 17-year-olds don’t know what they want to do for the next 10 years of their lives. However, May graduates Robert Blend, Allan Cate, and Madeline McAvoy made a commitment back in high school. All three went to Penn on NROTC scholarships, completing their commissioning ceremony on May 14. Later this summer, they will ship out for training and spend at least the next four to five years giving back to the U.S. Navy.

“It’s personal development for the service of others,” says Cate, a double major in political science and science, technology, and society from Burke, Virginia. “We’re told, right now, it’s about you. It’s about building you up into an officer who’s going to lead others.”

NROTC students are responsible for taking an additional class per semester in naval sciences, in addition to physical training at least twice a week. By the time students arrive at the commissioning ceremony, “they’ve achieved a ton,” says Daniel Westcott, a lieutenant and NROTC battalion advisor. “They’re probably the most driven students in any university setting. And they have to be.”

Time management is crucial, he says, not just in the day-to-day but also in long-range planning. “They’re not just thinking about tomorrow. They’re thinking about years from now,” Westcott says. “At the end of the day, we are training them to become leaders.”

Cate, who will be reporting for the Basic Division Officer Course followed by duty as a surface warfare officer out of San Diego, hopes to follow his naval service with a career in government. He says he is interested in climate security, “preventing troop deployments, preventing state breakdown by kind of fixing things at the source and making areas more resilient to climate pressures.”

Originally from Farmers Branch, Texas, Blend will report for basic underwater demolition/SEAL training in Coronado, California, for training as a Navy SEAL officer. He graduated in May from the Wharton School with a concentration in finance and real estate.

Blend fell in love with the idea of being a Navy SEAL. “It’s something about the way that they approach life: with two feet first, with no hesitation,” he says. “That’s the type of person I wanted to be: hard charging, never quitting, resilient.”

McAvoy was drawn to nursing. Originally from Fairfax Station, Virginia, she is a caregiver, the one friends turn to. Nursing is oriented towards patient care, she says. “You’re able to really give your whole self.”

This summer, McAvoy will report to Navy Medicine Readiness and Training Command in Camp Pendleton, California, for duty in the Navy Nurse Corps.

“You’re committing to this path, but in a way it has been freeing,” she says. Rather than stressing about an acute-care nurse externship, McAvoy has been able to use her summers to complete a community health internship, work as a camp nurse, and even fit shoes at a running store.

She, Blend, and Cate have been “able to kind of play around and explore, without having to worry about the implications for our future careers,” she says. “It’s weird, because we’re on such a straight path, but we were able to do more with a little bit less risk.”

For Blend, there was a freedom in this structure. “I didn’t have to worry about recruiting and all the classic Wharton stuff,” says Blend, who spent the summer after his junior year working at a tech startup.

“I feel like we really got the best deal of both worlds,” he says. “I found that the connections and the network that I’ve been able to make at Penn have been extremely impactful and probably will carry that through my naval career.”

The commissioning ceremony is a rite of passage as the students move through their evolution, says Blend. “It’s supposed to signify the transition from professional development and working on yourself to now becoming a selfless leader,” he says. “Everything from this point forward is not about us but about the people we’re leading, and the team and the mission.”

Five University of Pennsylvania students were honored at the Naval ROTC Spring Review on May 15, 2022. The Penn Naval ROTC program is open to students from nearby Temple and Drexel University, two of whom also received recognitions. Held at the Palestra, the Spring Review is an opportunity for students, formally referred to as midshipmen, to display their journey towards becoming commissioned officers in the Naval and Marine Corps. Midshipmen march and conduct close order drills in front of an audience of family members, peers, veterans, and superiors.

Lieutenant Colonel (retired) Alexander Vindman served as the guest of honor and keynote speaker. Vindman was a 2020-2021 Perry World House Visiting Fellow and most recently served as the Director for European Affairs for the United States National Security Council while he was on active duty. He thanked the midshipmen for their commitment and spoke of the challenging decades that laid ahead for the U.S. Armed Forces.

The ceremony was followed by a reception at Houston Hall’s Bodek Lounge.

Connor Blend W ’22 received the Petty Officer Dave Morgan Memorial Sword for excellence in academics and leadership while distinguishing himself amongst the battalion and university. Upon graduation, he will report to Basic Underwater Demolition/SEAL training in Coronado, California for training as a Navy SEAL officer.

Allan Cate C ’22 received the Military Order of the World Wars Merit Award for ROTC members who have demonstrated academic achievement and military professionalism. Allan is studying Political Science and Science, Technology, and Society. Upon graduation, he will report to Basic and Advanced Division Officer Course in San Diego, California for training as a Surface Warfare Officer, and then report for duty aboard USS Portland (LPD 27).

Ian Conway C ’23 received the US Marine Corps League Semper Fi Award. He hopes to be commissioned as an officer in the Marine Corps upon graduation. At the conclusion of the ceremony, Midshipman Conway assumed the position of battalion commanding officer.

Madeline McAvoy N ’22 was awarded Navy League Philadelphia Council Sword for excellence in academics and leadership. Upon graduation, she will report to Naval Hospital Camp Pendleton, California for duty in the Navy Nurse Corps.

Bryan Suh C ’25 received the Military Order of the World Wars Merit Award. Suh is a first-year student studying Political Science and hopes to be commissioned as an officer in the Marine Corps upon graduation. 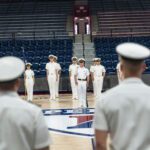 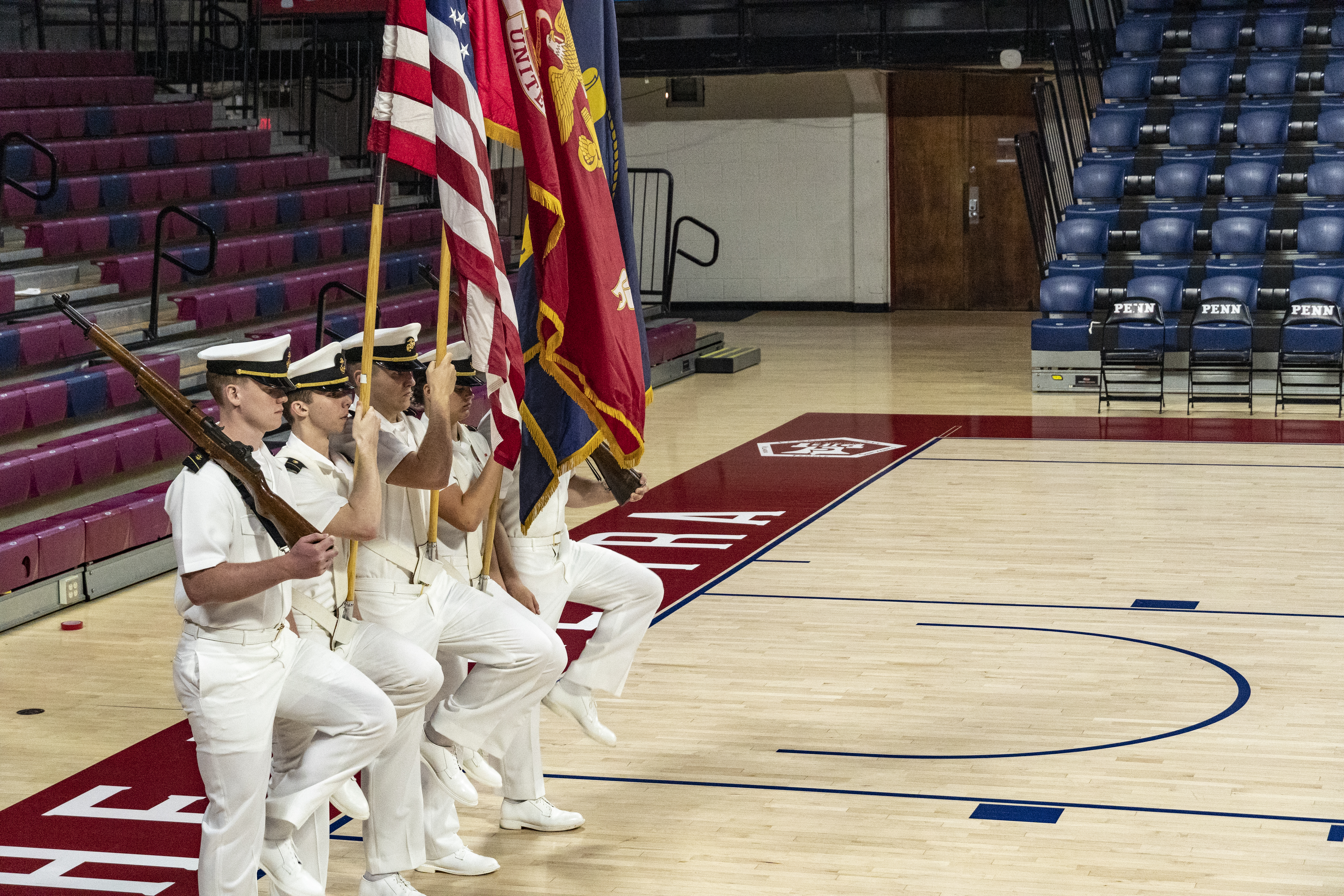 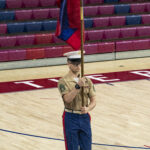 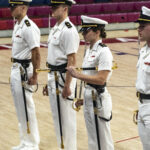 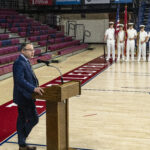 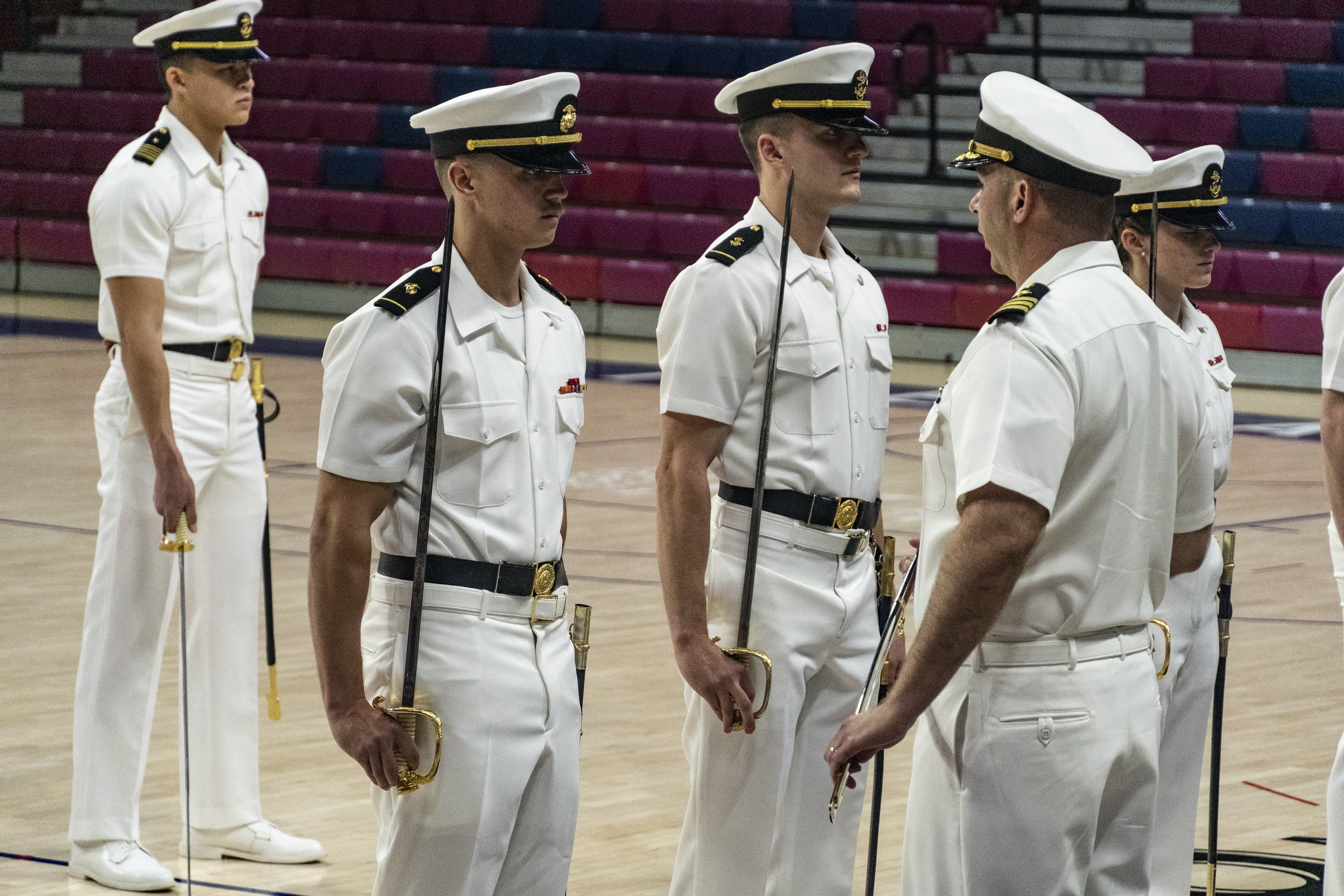 Julia Thomas commissioned as an Ensign in US Navy

On December 17, 2021, the Penn community gathered at Houston Hall to celebrate the commissioning of Julia Thomas as an Ensign in the United States Navy. Ensign Thomas, originally from Hagerstown, MD, was this year’s sole Navy ROTC scholarship recipient with the rare fall graduation. During her 4.5 years at Penn, she earned both a Bachelor of Science in Nursing and a Bachelor of Science in Economics with a focus on Healthcare Management and Policy.

"Ensign Thomas was an exemplary leader during her time here at Penn. We are proud to call her a graduate of our program, and we're excited to see the outstanding contributions she'll make to our nation's military medical community." 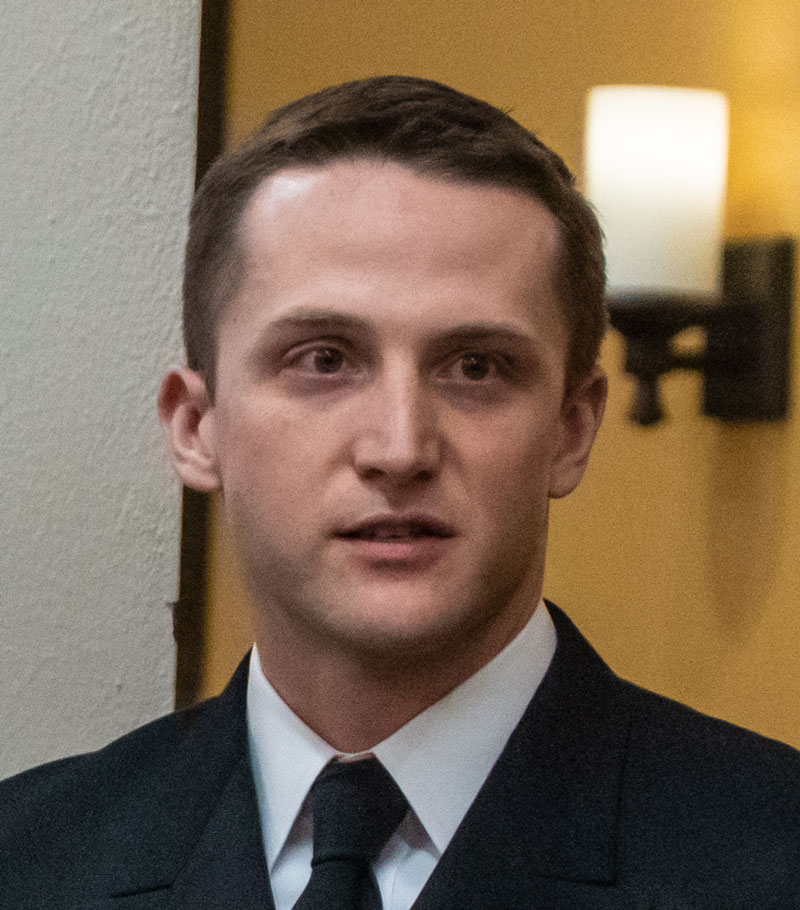 Ensign Thomas will be joining the Navy Nurse Corps at the Naval Medical Center in San Diego, CA. She follows a long, rich history of leadership between University of Pennsylvania and the Navy, dating back to the founding of our nation. In 1798, President John Adams appointed Penn graduate Benjamin Stoddert to oversee the newly established Department of the Navy. Stoddert’s leadership and vision helped lay the groundwork for the extraordinary US Navy we possess today.

University of Pennsylvania’s Naval Reserve Officers Training Corps program seeks to train the most technically and tactically proficient officers to serve in the United States Navy and Marine Corps. Half of participants enter the program as freshmen with a full academic scholarship. Program participants are supported by Navy officers based at Penn and are commissioned upon graduation. 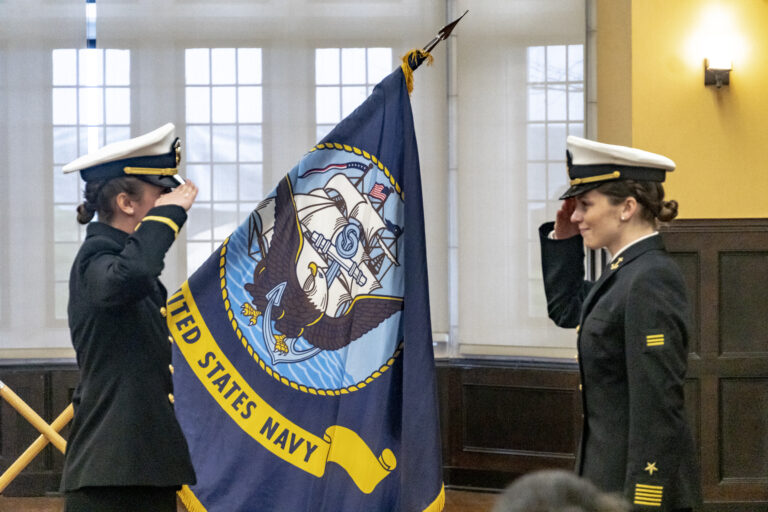 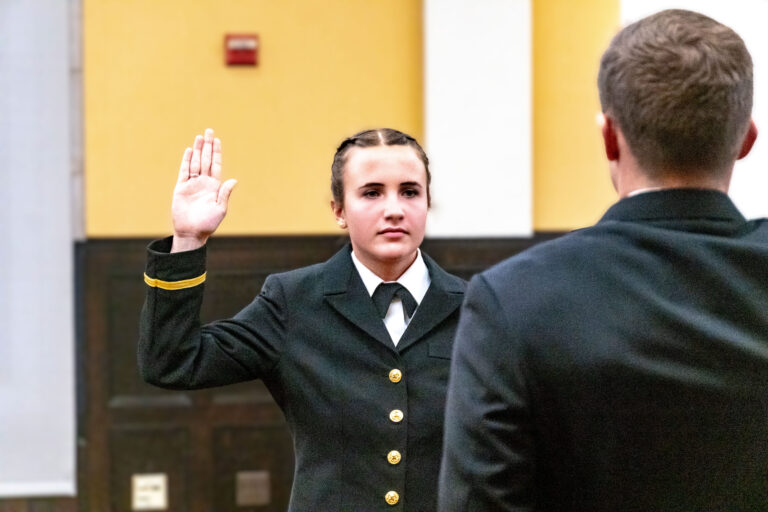 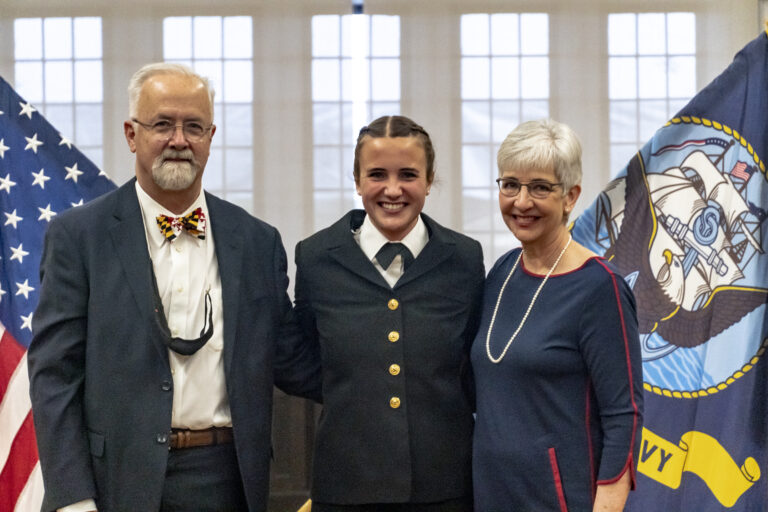 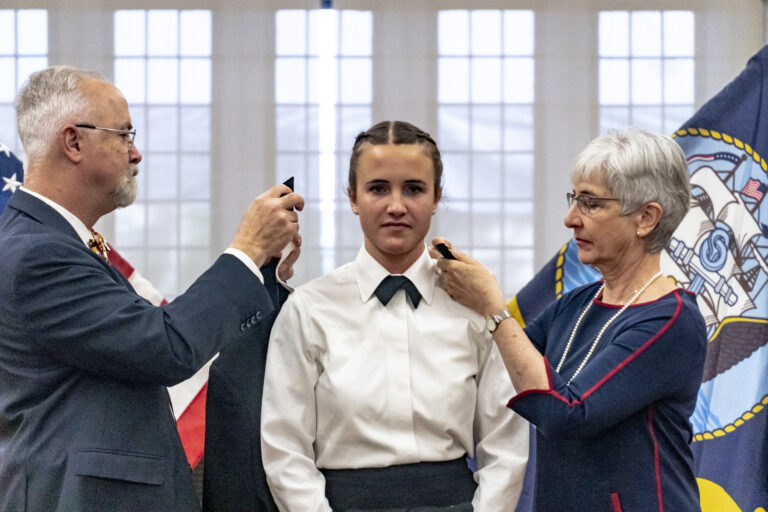 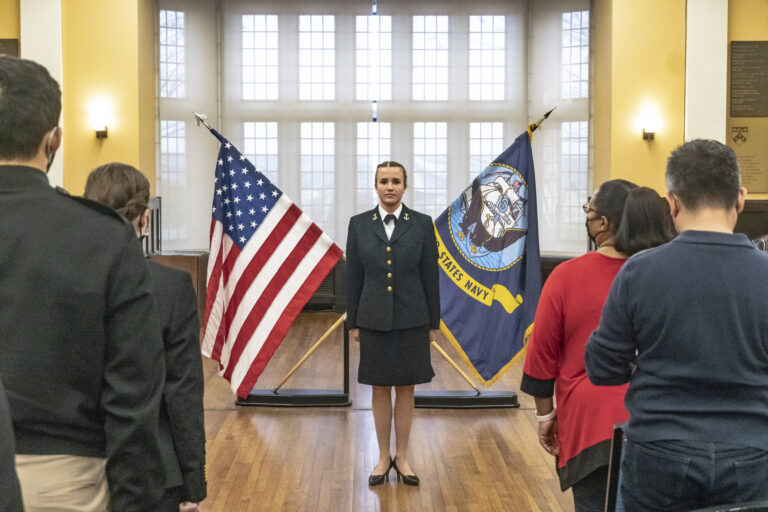 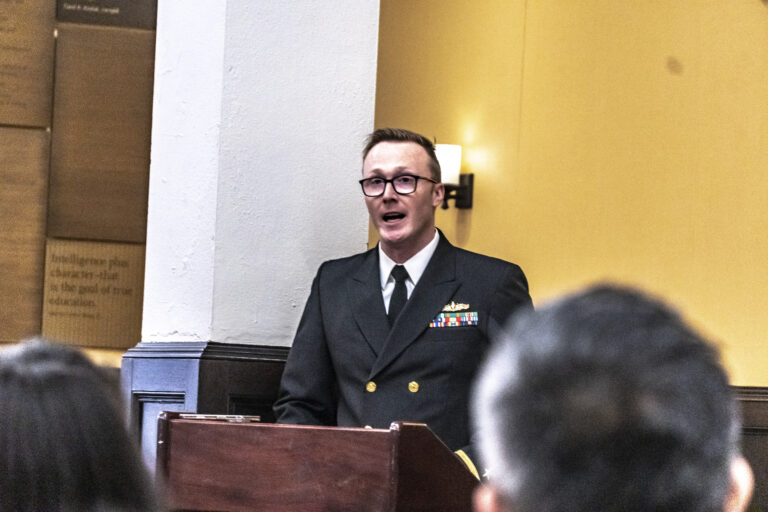 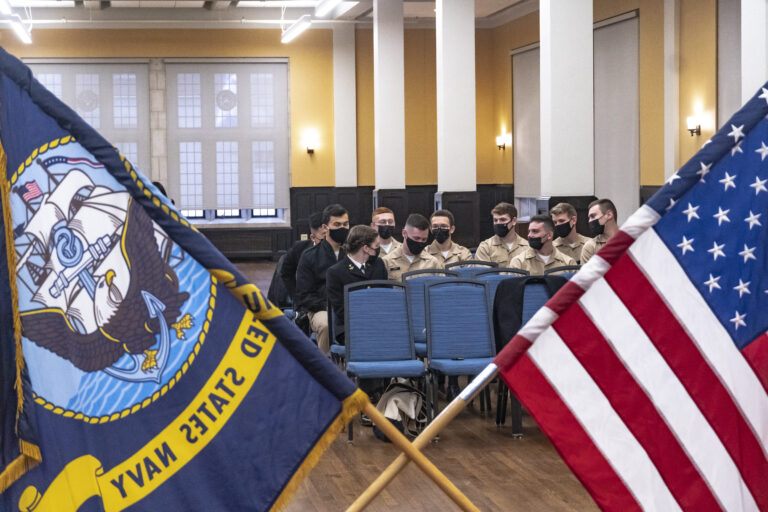 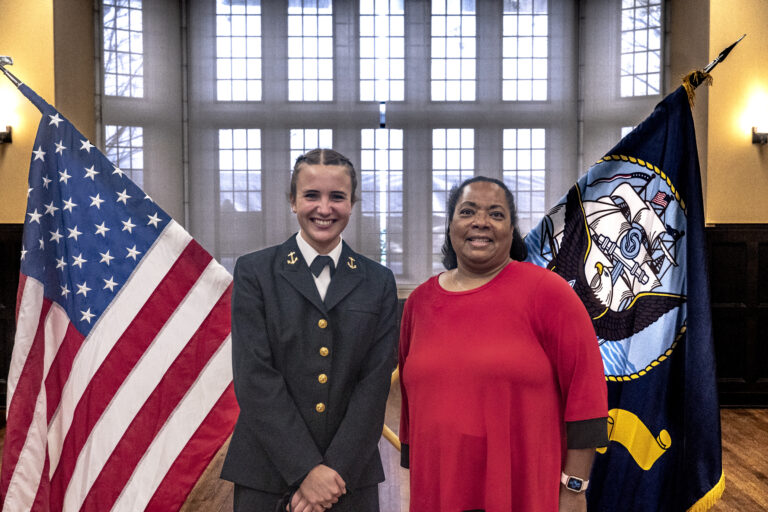